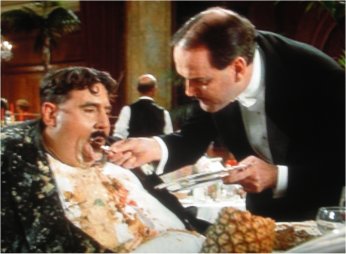 In a remarkable Saturday filing, Assistant U.S. Attorney John McNeil burps, pats his full belly, and orders a few more courses. The Department of Justice is not satisfied with a court ruling that hands them fully a third of the nominally confidential IRA interviews archived at Boston College.

Pushing ever further into the braveness of his Dadaesque performance, McNeil asks Judge William Young to reconsider his pronouncement that he has issued his "final order" in the matter of the BC subpoenas. Describing a set of subpoenas that seek information on the kidnapping and murder of Jean McConville, McNeil notes that BC has not yet completed their task of compliance, since "the Respondents have yet to inform the Court of the status of their review of the non-IRA interviews."

Those non-IRA interviews are from the other half of the Belfast Project collection, which involved members of loyalist paramilitaries in Northern Ireland. So the federal government is now diligently insisting that the archives be combed in full to determine if any members of the UVF or UDA joined in the IRA's murder of a British informer.

We need to dig into this George Washington character and find out if he had something to do with the death of that poor bastard Nathan Hale.

And to think I've argued that the DOJ hasn't bothered to understand the political implications of the task it was being asked to perform.

Second, McNeil asks the court to require that BC turn over "those materials related to interviewees AA, BB, and CC (as they are identified in the ex parte filing), if they are not already included in the five complete interviews to be disclosed."

"Interviews of these individuals are responsive to the subpoenas in this case and are likely to have substantial investigatory value even if the interviewees do not make specific mention of the McConville kidnapping and death."

See how that works? Subpoenas for “any and all interviews containing information about the abduction and death of Mrs. Jean McConville" can force the disclosure of whole broad ranges of interview materials, "even if the interviewees do not make specific mention of the McConville kidnapping and death."

And so on. Complete motion is below.

I did want to highlight this language from pg. 2: "As with any subpoena, the Respondents bore the burden of reviewing all material in their possession for responsive material and then either producing that material or seeking relief from the Court. The Respondents in this case failed to undertake the first step of reviewing all potentially responsive material. While the Court’s orders largely obviated the need for the Respondents to make such a review (because the Court undertook that task itself), that task remains incomplete with respect to the untranscribed tapes."

So here's the government saying the very thing that I've said over and over again: BC had a responsibility to figure out what material in its archives was responsive to the subpoenas. Because they never bothered, and still haven't begun to bother, the court did it for them, and forced them to hand over a whole set of confidential materials that never needed to leave the archive.

Govt Motion to Reconsider
Posted by Chris Bray at 5:36 PM