Mildly amusing new and tiny little discovery that will only be of interest to close observers of the Belfast Project subpoenas who enjoy making fun of government lawyers. That might very well be an audience of me, but let's do this thing anyway and call it a party.

When Assistant U.S. Attorney Barbara Healy Smith sent the First Circuit a letter, two weeks later, to say the things she hadn't thought to mention during oral argument over the Belfast Project subpoenas, nobody much understood what she was up to. Writing at Letters Blogatory, lawyer and longtime observer Ted Folkman shrugged that "it must be the silly season in the Belfast Project case."

"I am not sure of the procedural correctness of the government’s letter" Folkman wrote. "The Federal Rules are silent, and the letter is pretty plainly not a citation of supplemental authorities under Rule 28(j)."

Beats the hell out of me what that is, but then here comes my old friend Google with Rule 28(j) of the Federal Rules of Appellate Procedure:

If pertinent and significant authorities come to a party’s attention after the party’s brief has been filed—or after oral argument but before decision—a party may promptly advise the circuit clerk by letter, with a copy to all other parties, setting forth the citations. The letter must state the reasons for the supplemental citations, referring either to the page of the brief or to a point argued orally. The body of the letter must not exceed 350 words. Any response must be made promptly and must be similarly limited.

Here's a link to Barbara Healy Smith's letter, in full. It surely doesn't look to me like it cites any pertinent but previously overlooked authorities -- I just see whining. But here's the thing that Carrie Twomey just pointed out to me. If you open the letter in Adobe Reader and click on "properties," you see this: 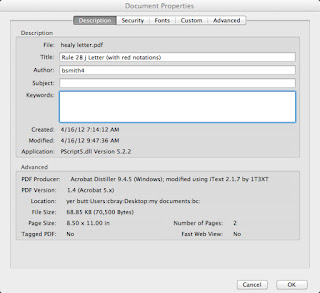 So Barbara Healy Smith titled her document, which no one apparently perceived or even now perceives to be a Rule 28(j) letter, "Rule 28j letter (with red notations)."

If your letter isn't a Rule 28(j) letter, but you call it one, you're good. That totally covers it. This is why every document I write is titled something like, "Convincing letter to that dude who wants to sue me," or "Letter to my wife to not be mad at all about what I did to the left side of the car."

And the red notations: Who from?
Posted by Chris Bray at 6:58 PM