Imagine a Rope, and Perceive It Around Your Wrists 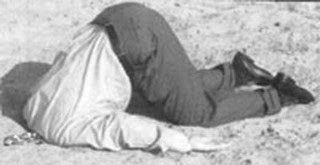 From the same news story that I discussed yesterday:

"While Boston College clearly informed the project director that confidentiality could be guaranteed only to the extent that American law allows, [Moloney] and one of his interviewers have chosen to attack the University in the media for complying with the government subpoenas," the letter to students abroad read.

Irish-American groups have attacked the subpoenas in the political arena, pointing out that those subpoenas serve a dangerous political effort rather than a conventional murder investigation. These groups have written to Secretary of State Hillary Clinton to ask that the State Department intercede and ask the Department of Justice to withdraw the subpoenas. They've met with members of Congress and asked them to do the same, and to contact Attorney General Eric Holder. They've secured the involvement of Senator John Kerry, the chairman of the Senate Foreign Relations Committee, who is also asking the State Department to intervene. They've met with officials at the Police Service of Northern Ireland to complain. They've done something. They've tried. They've bothered to be awake and alive, to speak and to think.

Meanwhile, Belfast Project researchers Ed Moloney and Anthony McIntyre have sued the attorney general, and have filed two legal appeals that have delayed the delivery of embargoed archival material to the police, an effort that adds time to the clock and allows for the possibility of political intervention against the subpoenas. Again, they've bothered to get out of bed. They've bothered to care and to try.

While all of those other people fought, Boston College laid like a lump on the ground, making a limp effort in the trial court before rolling over and going back to sleep. They've chosen a posture of helplessness, pointing at the rope draped loosely across their wrists and moaning that oh, what can we do, our hands are tied. Other options have always been available.

They have chosen. And their choice is shameful. It won't be forgotten.
Posted by Chris Bray at 11:08 AM